When Should You Give In To Your Child’s Tantrums?

Every parent experiences moments when their child appears to be completely out of control, much to the chagrin of those around, and of course cutting a sorry picture in public. These moments of lack of emotional control in the child are certainly upsetting, embarrassing, intimidating and saddening, and are true testing times for parents of toddlers and older children. Let us get to know some interesting facts about tantrums. These information pieces will help us arrive at understanding tantrums, and certainly when to give in and when not to, during a tantrum!

What Is A Temper Tantrum?

In simple terms, tantrums are how children, in the age group of 2-5 years, react to complicated and difficult emotions. Tantrums are common during the second year of your child’s life as their language skills begin to develop. The crying, screaming, yelling, wailing, sobbing, kicking, falling, throwing themselves to the ground, stiffening up, arching backward, flailing, running about aimlessly, throwing things and so on are reactions to the emotions that they do not comprehend, and hence cannot express how they feel. As your child’s language skills improve, tantrums die down.

Why Do Toddlers Have Tantrums?

You may be surprised to learn that tantrums in toddlers and older children actually follow a pattern and are quite predictable. They come in all shapes and size, and are most likely to happen in the following situations:

When Should You Give In To Toddler Tantrums?

Sometimes, giving in to your toddler’s tantrums might seem the best solution to your tenuous sanity levels, at that moment. As goes the age-old adage, you must be wise enough to pick your battles. Where there’s no chance of winning, there’s no point of putting up a fight. For example, in a situation where your priority is getting to a place on time, and your toddler has launched into a tantrum for something they want; give in – albeit, quickly. Do not deny it first and then hand it over to them. This sends a wrong message, a lasting one at that. They interpret this action as your approval after persistent pestering to get whatever they demand. They will replicate it every time they need something, and you might just have to give in every time. This behavior and reason to throw a tantrum will get hardwired in their brains.
Also, sometimes as a parent we overload our children with too many rules, regulations, dos and don’ts. Young children cannot fathom the importance of these protocols. They feel stifled and when it comes to a point where they cannot understand how to express or vent out their feelings, they throw a fit in the form of a violent tantrum. These are times when we need to loosen up a little, give in to their tantrums. Modeling good behavior can also be done by giving in to your child’s tantrums, once in a while.

How Do You Stop Toddler Tantrums?

There is no ideal response to a tantrum. There are multiple ways of dealing with children’s tantrums.

How Not To React To Your Child’s Tantrums?

It is our reactions and responses during these heated moments that shape the characters and behaviors of our children. So, keep your calm, preserve your composure, and remember to maintain a positive environment in the house!
Does your child throw tantrums? How do you handle it? Do share your experiences in the comments section below.

Benefits Of Puzzles For Your Preschooler

Pre-schooler is a very tender age and the kids learn whatever we teach them. Their minds are like blank slate so our endeavor must be to write with the most efficient ink. Because this is an age when the kid finally starts developing concepts and understand right from wrong. So this is an age when parents should introduce kids to several mind games instead of mere physical games. As several types of mind games like puzzles can effectively boost a child's intellect and help him achieve his developmental milestones much effectively. So before we dwell into further discussion on how puzzles can make a difference, let us first understand what puzzles exactly are. What Are Puzzles? Types Of Puzzles Benefits Of Puzzles For Pre- Schoolers Skills Developed By Puzzles In Pre- Schoolers Disadvantages Of Puzzles What Are Puzzles? A puzzle is an important educational tool that might come in form of a game, or a problem. And this can contribute in a huge way in determining a person's knowledge and understanding. Puzzles can force a person to use his intellect as only logical and step-by-step solving can fetch him an answer. And these puzzles can be of different types. And these.... 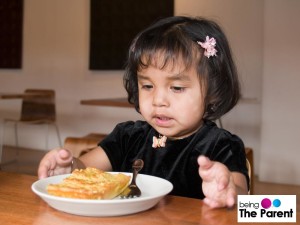 Is Your Child Finicky??

[caption id="attachment_1246" align="alignleft" width="300"] Things to Do When You Have A Finicky Child[/caption] Mothers these days have some common problems to share regarding their children. Children being choosy; not wanting to eat their meals; acting stubborn or misbehaving in public are the common worries of the mothers, today. You discuss any of these and you see most of the mothers nodding their head to say yes. If your child makes various excuses to avoid his food like, he says, he is not feeling hungry, he wants to go to the toilet, the food is very spicy and he cannot eat it, he is feeling sleepy, he wants to play or any other excuse that he makes, it means he is not interested in your food and you always have to force him to eat his meals or refreshments or any other thing. If you scold your child and make him eat, you are making him all the more disinterested in the food that he is eating. The correct way is to handle such kids with a lot of patience and arouse their interest in the food. This is how you can make it possible. Engage him in your cooking- You can ask your child to pass you a glass of water that is needed for cooking the vegetables or tell him to get....

12 Tips To Travel Safe With A Toddler

Your travel plans need to be aligned with your child’s routines, and though there is no guarantee that your child will not be fussy, there sure is a satisfying assurance that you have managed to take care of everything that your child needs. Sometimes travelling with a toddler can be nerve wrecking, throwing you off the wits with crying toddlers at the tow. When it comes to travelling with an infants or toddlers, you really need to think about many aspects. Safety is one of them. Check out these simple tips to travel safe with a toddler: While traveling by public transport/car   For infants(0-1 years) Always carry /hire a car seat if you are traveling by bus, self-driven car, taxi or train. Keep him safely seated in car seat; it will protect him from unexpected jerks. In case you are flying for a longer duration, it is good to keep a car seat if airline does not provide the same for a baby For Toddlers (1-2 years) You should take your baby stroller along with you if you are going on long holidays. If carrying sounds tedious, hire one. Toddlers at this age cannot sit still for more than few minutes. So be very attentive to avoid any accidents For....

While it is heartening to have your child love you so much that he cannot think of spending even a moment away from you, it is not a very practical proposition. Having to face a big tantrum and a bucketful of tears every time you need to step out of home or your child needs to go to play school is definitely not an easy thing. What your child is exhibiting is called separation anxiety. Understanding what he is going through and identifying few coping mechanisms can help a great deal in reducing the heart breaks when you are not around the child. Why Is My Toddler Feeling Separation Anxiety? There are three primary reasons why your toddler feels separation anxiety. Your child knows that you are the parent and his primary care giver. He believes his whole life and existence depends on you being with him. He feels most secure with you and he does not believe anyone can take care of his needs the way you do. So, when you are away, he becomes very anxious, cranky, insecure and sad. That's separation anxiety for you Your child does not yet understand the concept of time. So, even if you are leaving your child for 10 minutes to go to washroom, he does not know it. It is a lot of....