The first few months after the baby is born is a tough and challenging time for both the mother as well as the baby. The infants do sleep for longer durations; however, the time is unfortunately not in favor of everyone. Babies tend to take sufficiently long naps during the day, which is why they, and by extension, their parents, have long sleepless nights. Mothers, in particular, may feel depressed and downright irritated because of this, as it upsets their whole routine. The parents have no choice but to find ways to catch up on their sleep, while also put their babies to sleep. 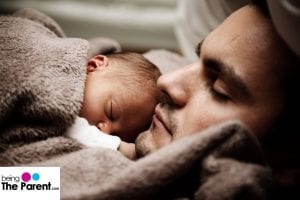 In this process which is indeed a stressful time especially for the mothers as this is the time when they wish to get cozy and comfortable in the bed and have a good sleep, but the baby instead wants a feed, a burp, some attention so they start crying, looking for some cuddle time. Unfortunately, one cannot be awake the whole night not can you forcefully put the baby to sleep. Yet there are times when one must walk through the night to put the baby to sleep and this is where they end up making some mistakes that could put them in trouble later in life and that could be a cause of risk for the baby as well.
Given below are some of the mistakes that are done by new parents. Let us go through the mistakes and avoid making them repeatedly and have a better and smoother life with the babies.

1. Never Allow The Baby To Sleep In The Bucket Which Is Detached From The Base:

It has been seen that while traveling, in case the baby sleeps, parents generally tend to pick the baby with the bucket shaped seat and place it on the floor while finishing their remaining tasks so that the baby does not get disturbed, However, it is crucial to note that leaving the baby on the floor is a very dangerous option as the chances are that the baby can fall in the front and get injured as well as damage the air passage which could be fatal, so it is advisable to always let the car seat be attached to the base, while the baby is sleeping in it and not only as a bucket, else attach the bucket to a pram or stroller with the adequate adapter.

2. Sleeping With The Baby On The Couch Is Asking For Danger:

It is mostly seen that parents feel very relaxed when they sleep with the baby on their chest. This indeed is a great feeling for the parents yet very dangerous for the baby as he might fall, slip even choke while the parents sleep peacefully, especially because the baby could be on a pillow,

3. Never Purchase The Cute Looking Bumper Cribs That Are Seen At The Stores:

Before the birth of the baby, the parents are attracted by the advertisements or by the products that can be seen at stores. It is not advisable to buy the bumper cribs as it does save the babies from bumps, falls, especially when they are trying to crawl due to its soft and cushiony bumpers, yet they can be a cause of choking hazards. They can even lead to Small Infant Death Syndrome, also referred to as SIDS.

4. Do Not Rely On The Baby Monitor Technology:

Lately, the baby monitor is gaining momentum as they are extremely useful for mothers who are too busy. These monitors indicate the parents by a beep if there is any rigorous movement with the baby. That way the parents can have a sneak peek at the video and know if the baby moved in sleep or is restless. Since it is based on technology, it could end up in showing false alarms as well as leading to anxiousness or nervousness in parents. The medical specialists are not in favor of placing any sensors under the baby’s mattress to create a safe environment for sleeping. Getting alert notifications and other data on the gadgets is not an alternative for letting the baby alone.

5. Never Stop The Sleep Training Primarily Due To Teething:

Babies are too new to the world so they take time in adjusting, they can keep having stomach upsets, gastric troubles, colds and with age even teething. They will always be surrounded by bacteria or recovering from the illness. In short, there is no right time to train them to sleep. The training should not get obstructed because of these reasons. Once the baby is more than four months, it is advisable to train them for sleeping on time, irrespective of the fact that the body has some problem or the other.
There are some more common mistakes new parents make. These mistakes will interfere with your child’s sleep and, thus, contributes to your sleepless nights. Make sure you will not make the following mistakes:

Thus, sleep training should be done well in time so that the baby gets habitual to it, and it will become easy for her to sleep as well and make things smoother for the entire family.

Spicy Food During Breastfeeding – Is It Okay?

How much do Newborns Eat in First Few Days?

Newborns bring joy, happiness and completion to any family. They also bring along lots of responsibilities, sleepless nights and feeding times. Ever wondered how much feedings a newborn could need? How much milk could a newborn drink in the first few days or how much they could feed in their initial days after birth? Well, we are here to share all the insights with you so that all your queries are taken care of! When to start feeding the baby after birth? Some doctors recommend feeding your baby as soon as he/she is born. This is because the sooner you breastfeed the baby, the faster your body will start the milk supply. While most women follow this rule, many women are not able to or allowed to breastfeed their babies owing to various reasons like a C-section, delivery complications to the mother, after-birth complications of the baby or a baby in NICU. It is highly recommended that a mother feeds her first milk or colostrum to the baby as it is highly nutritious and protects the baby in the first 48 hours of their life. After that, your regular milk supply initiates. How often does the baby need to be fed? As many times as he/she wishes! Yes, absolutely. The more your baby....

What Are Birthmarks? What Are Their Different Types?

What Are Birthmarks & Its Different Types? While most of us do not think twice about our own birthmarks except when giving it as identification marks in passport and other identity cards, when it comes to birthmarks on our kids, we tend to worry too much. We are concerned about the size, color, location of the mark and question ourselves if it is a birthmark or some skin condition to worry about. So here we are trying to clear up all your questions and doubts on birthmarks. What Are Birthmarks? As the name suggests, birthmarks are marks that appear on the skin of your baby at birth or in the weeks immediately following birth. There are two kinds of birthmarks: Vascular birthmarks, which are caused by irregular blood vessels under skin; and Pigmented birthmarks, which are caused by too much pigments in the skin Birthmarks can be brown, black, pink or red in color, and can appear at any place in the body. Are Birthmarks Harmful? Most birthmarks are harmless and would not cause any harm in the future too. However, at times, they might be a sign of some underlying condition (Read the different types of birthmarks in the below section and assess which one does your baby....