Breast milk for the newborn is the best and the most excellent choice a mother can make, but few mothers have to resort to formula milk as well, due to some inevitable reasons like:

Any of the above reasons necessitate the babies have to be given a top feed. It is safe to give formula feed to the babies as and when they demand. Infant formula is a nutritional substitute and is loaded with nutrients that help the baby to grow and flourish.

It is believed that formula-fed babies generally lead to obesity later. Let us run through some important points, which lead us to the conclusion as to why and how the babies who are on formula are on the chubbier side.

The most important food for a newborn is milk, whether mothers or formula-fed, and it is itself variety specific. There are a few deductions which can be made based on the table given below:
The protein consumed by a breastfed baby reduces with age, whereas the protein requirements of a formula-fed baby increase after the first 1 or 2 months
The ratio of Omega 6 vs. Omega 3 in formula milk also accelerates the increase in fat cells
The composition of formula milk stimulates the production of more and more fat cells
It can be seen that initially, the fat content of breastfed baby is really high, but as solids are introduced the energy and protein intake increases drastically for the formula-fed babies and is much more when compared to the breastfed baby

Whether the baby is taking natural milk or is formula fed, the result can be seen on the baby’s body itself. Breast milk consists of non-nutritious constituents, a type of lactogen which regulates cravings, making the babies full by the end of a feed. Whereas the formula milk lacks all of these constituents. Another reason why breastfed babies are not towards the chubbier side because the composition of breastmilk differs from one mother to another and the baby controls the quantity he wants to intake, thus not allowing obesity to set in

The mode of delivery plays an important role in setting Chubbiness in babies. Breastfed babies have full control over the amount of milk they take in, and it requires effort from both ends to meet it. Thus, when the baby is tired, he stops sucking even though he is still not full, and the stomach will not become overextended. The formula-fed babies are generally overfed, and stomach extends due to that

The hormones Leptin and Ghrelin are very significant in regulating diet and hunger. The concentration of the Leptin hormone in breast milk becomes abundant when the baby touches the verge of hindmilk. The second important hormone, Ghrelin, is manufactured by the stomach and functions as an indicator when the baby feels hungry. Babies who nurture through formula have increased levels of Ghrelin, which means higher or increased appetite. Table 2 below validates the above-given data

5. The Hormone That Progresses The Growth

The Growth hormone controls our oily and fat tissues discharging oily and acidic elements that can be acted upon by the rest of your body. Low hormonal development leads to low metabolism and vice versa. IGF-1, a group of hormones present in the blood produced by the liver, aids in the control of tissue growth in relation to nutrition obtained by the body. The higher protein content, which is 50-80%, is present in the formula than breast milk – propels up the baby’s secretion of IGF-1. Nonetheless, this rapid increase of IGF-1 rearranges the pituitary gland in a manner that seven years down the line, children who were taking formula feed have a lower IGF-1 level. Various other studies performed on formula-fed babies and breastfed ones deduce that if breastfed among 13-25 weeks, it lessens the threat of being obese by nine years, almost by 38 percent. On the other hand, babies who are being breastfed for 26 weeks or lower the risk of hitting obesity by 51 percent. The chart given below corroborates the above data (source)
Hence we can conclude that throughout the initial 6-8 weeks of the lifecycle, there is negligible difference in growth (weight gain and length) between breast milk-fed babies and the ones fed on formula. Almost at two months of age, the babies that are fed on formula increase in weight and length measurement more quickly than the infants fed on mother’s milk. Numerous studies have proven that by the time a breastfed baby is a year old, it is comparatively bonier than a baby who is formula-fed. Scientists suggest that the instant increase in weight amid the formula-fed babies possibly denotes fat mass gain. Hence, the formula-fed babies are comparatively chubbier than the breastfed ones. Of course, we cannot deny the role of the eating habits and lifestyle of the child.

Eucalyptus Oil For Babies Is It Safe To Use?

Essential oils have become very popular nowadays and are widely used for their medicinal properties. One such essential oil is eucalyptus oil. It is 100% natural and popularly used as a decongestant for respiratory problems. Babies are prone to cold and fever, and as a mother, you want to try using home remedies rather than loading your baby with medicines. So you might be tempted to use the old tried and tested eucalyptus oil for babies sniffles and snuffles too. However, do you know that eucalyptus oil for babies is recommended to be avoided who are under ten years of age? Intrigued? Read on. What Is A Eucalyptus Oil? Benefits Of Using Eucalyptus Oil For Babies What Are The Compounds Present In This Oil? Why Can't We Use Eucalyptus Oil On Babies? Important Things To Remember About Eucalyptus Oil For Babies What Can You Use To Treat Your Baby's congestion Instead Of Eucalyptus Oil? Things to Keep in Mind When Using Oil What Is A Eucalyptus Oil? Eucalyptus oil gets from the leaves of the eucalyptus tree. Eucalyptus oil is used in some medicines, as a perfume, and also as some industrial uses too. It has a sweet and is a colourless liquid and contain the strong woody smell. More....

How To Check Baby’s Temperature Using A Digital Thermometer?

You will easily notice if your baby is warmer than usual. A touch on the forehead and on the neck is often enough to indicate a higher-than-normal body temperature. And if the body warmth is seen along with other symptoms that indicate an illness, then you might be worried that your baby has fever and you would want to know his exact body temperature. This is where a thermometer will come in handy. Read on to understand various types of thermometer and how to use them. What Are The Kinds Of Thermometer Available In The Market? Thermometers can be broadly classified into two: Mercury thermometer, which is a narrow glass tube containing a small amount of mercury Digital thermometer, which is a small handheld device which has a small screen where the body temperature will be displayed Now, mercury thermometers are the traditional way of measuring temperature. However, it is not advisable to use mercury thermometer for your baby. This is because: There is a chance that the thermometer can break and the broken glass can injure the child There is a risk of unintentional mercury poisoning So, all pediatricians recommend the use of digital thermometers for babies. What Are....

Not Breastfeeding? Come Out Of Your Guilt!

Guilt seems to walk hand in hand with motherhood. Whether it is about staying at work when the baby is with a caregiver, or attending that party you so badly wanted to while the baby is craving for your presence. Not breastfeeding your child, owing to personal or medical reasons, also renders many a mothers to guilt. Breastfeeding is beautiful and ideal. Is life ideal? Hard fact: NO. A new mom may just pine to breastfeed her baby but can't because of different reasons. She may be a breast cancer survivor with double mastectomy. Perhaps, her body is fighting hard against infection in the blood. Probably, she is on medication that is hazardous if the baby receives it via breast milk. Sometimes, the breasts simply do not lactate. You are and will be a MOTHER You want so deeply to feel like the Virgin Mary, but Alas! Your body is not permitting. Listen to yourself. Listen to your body's natural intuition. It is definitely better to rely on formula milk for infants when practical reasons stop you from nursing your baby. Don't blame yourself please. It happens. Take it in your stride. You are still the Mary, nursing a little angel! About formula milk, it was invented in the 19th.... 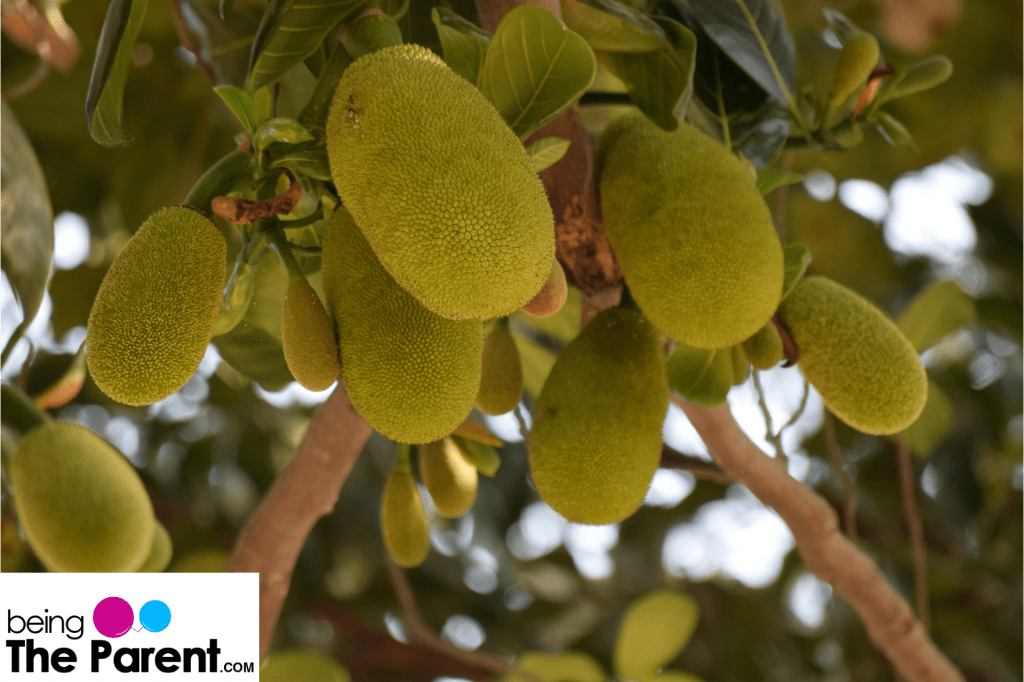 Eating Jackfruit During Breastfeeding – Is It Safe?

Breastfeeding is very vital for both the mother and the baby. To be able to breastfeed well, it is important that the mother has a full-fledged nutritious meal and there are many foods that are on the list, but the newly found is Jackfruit. This is sweet and fruity and has a very different texture as well. This fruit is enriched with vitamins, potassium, and anti-oxidants. It is found in Southern regions of India, specifically in the Ghats and prevalent in Karnataka and Kerala, the important question here is, therefore, if having jackfruit while breastfeeding is a good idea? All foods taken during breastfeeding are sure to reach the baby’s body in smaller portions. The consumption of Jackfruit leads to heat generation in the body so should ideally be taken in reasonable limits. Should You Consume Jackfruit While Breastfeeding? What Are The Benefits Of Eating Jack Fruit During Pregnancy? How To Consume JackFruit While Breast Feeding? Are there Any Side Effects of Jackfruit While Breastfeeding? Precautions to Take While Eating Jackfruit During Lactation Let us now see some points which will offer insight if the Jackfruit should be consumed during the lactation period,....