What Is Growth Hormone?

What Is Growth Hormone Deficiency And What Are The Causes?

The growth hormone deficiency (GHD) occurs when the pituitary gland fails to produce enough growth hormone. As a result, the speed of growth takes place considerably at a lower pace and usually, the final height is affected.
The childhood-onset GHD is differentiated into three subdivisions:

What Are The Signs And Symptoms Of Growth Hormone Deficiency Among Children?

Signs and symptoms of GHD among the children will vary with the severity and the age of the child. Mostly, the slow growth may not be noticeable until the child turns 2 or 3 years old. The intelligence of the child suffering from GHD usually will remain unaffected. Some of the signs exhibited by the child having GHD includes:

How Common Is Growth Hormone Deficiency In Childhood?

Growth hormone deficiency is reported in one in every 7000 babies. This condition is also may be the indications of other health conditions like Turner’s syndrome. This will increase the chances of GHD among children to one in every 3800 births. Some pertinent causes are:

How Is Growth Hormone Deficiency In Children Diagnosed?

Your pediatrician considers the chances of GHD when your child does not meet their height and weight milestones and exhibit some of the above symptoms.

How Is Growth Hormone Deficiency In Children Treated?

Daily shots of growth hormones are given into the fatty tissue of the child such as buttocks. This is a long-term treatment often lasting till the child reach puberty. However, during this period, the child needs to regularly visit the doctor and monitor the hormone levels in the blood. The change in the dosage of medicine if needed depends on this blood test on regular basis.
Generally, injections are given in the evening to synchronize with the body’s natural cycle of GH production.

The sooner the condition is treated, the chances of that a child to grow to a near-normal adult height increases. So never hesitate to start the treatment once your child is diagnosed with GHD. 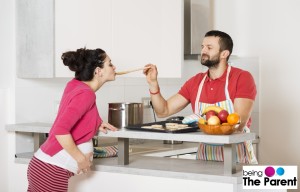 To-Be-Dad’s- You Feel Pregnant Too!!

As many women must have put it, and as many men must have agreed, sharing your partner’s pregnancy like her, in technical terms, is plainly not possible. So while the mothers-to-be lead a life of unparalleled and multiple changes both physically and mentally, the fathers-to-be just be a couch potato, running errands if asked to, or worrying about how life is going to be after a baby. Well, there’s much better things that need your attention, and though you cannot feel the nausea, the first breaths or the kicks, there’s plenty to share with your wife and be a part of the incredible journey you are on the path of. Well, you cannot be pregnant. But you can be supportive to the creation that is growing, multiplying and becoming more of a baby day by day. Observe. Track. Feel. Speak. Listen. Yes. Do it all. See how she has her mood changed in a second, and how her tummy is growing. Understand what makes her feel better about herself, and do those things often. Talk to her. Share your plans on the baby. Opinions. Listen to her. Let her tell you how she’s feeling from inside, why does she need to pee so often, and what’s her backache all about. You could cook for her, since....

Buying First Bra For Your Daughter

The first bra is a big thing for your daughter. And as her mother, you have the responsibility to ensure that she has a good 'first bra experience'. However, Buying Bra, especially, Buying  First For Your Daughter is not as easy as it sounds. Most parents are somewhat uncomfortable at the thought of their seemingly little daughter ("whose birth feels like yesterday") needing a bra. So they might delay the big day. The daughter, on the other hand, might be confused too. If her friends are already wearing bras, then she might want one even if she doesn't need one. Alternatively, if none of her friends are using them yet, then she might be embarrassed to buy one for herself, even if she wants. The way out? Shed your discomfort. Your discomfort can spread to your girl. There is no shame in having breasts and using bras. This is what you should feel and this is what you should make your daughter believe. When is the right time to buy the first bra for my daughter? How to choose the right bra for your daughter? What else can I do to make my daughter's first bra experience better? When Is The Right Time To Buy The First Bra For My Daughter? The average age when girls start....

When You Are Pregnant For A Second Time….

Being pregnant for the second time bring a lot of excitement and apprehensions for most of the females. Some women become panicky and are surrounded by innumerable 'ifs' and 'buts'. The second pregnancy begins with itself the usual signs such as nausea and vomiting. However, some visible differences are observed with the advancement of pregnancy. 'Short labor' is regarded among the good changes while 'strong after pains' is considered among adverse changes. You will be surprised to see that as compared to first pregnancy where you showed quite late this time 'you will show sooner". This is due to the fact that the uterus does not revert back to pre-pregnancy size. Since your uterus has previously experienced the pregnancy-related enlargement, the uterine ligaments and muscles have stretched earlier so your second pregnancy will become evident soon. Fetal movements Tiredness Pains and aches Braxton Hicks contractions Shorter labor Varicose veins Worse after pains Increase in Waist size Urinary incontinence Complications Fetal movements During the second pregnancy you are more bodily aware as compared to the first time. For example, during the first pregnancy,....

Animated movies are the next new thing coming up in the field of entertainment for kids. Not only are they fun and entertaining, but it also provides a mode of learning new things. Also, they help in inculcating moral values in kids. If you wish to make your kids learn in a fun and exciting way, do show them these best-animated movies of 2017. You may also check Netflix for these classic animated movies. Top 10 Animated Movies 2017 Here's a list of some of the best-animated movies of 2017 that took the kids on an exciting roller coaster ride of adventures and thrill. 1. Loving Vincent IMDb Rating: 7.8/10 This movie took about six years to complete, and the final product is worth every second of the hard work taken for it. This movie is kind of like an educational thriller, with lots of plots and twists wherein the various circumstances under which the young artist suicides are unraveled, including every single detail of his life and the people he met, which motivated him throughout in his paintings. This movie is a whole new level of creative representation of the biographical sliver of Vincent Van Gogh's tragic life story. 2. Your Name IMDb Rating: 8.4/10 This is one of the....