Kids have an analytical mind. They are always looking for things beyond this world through their imaginary mind. That is why stars and constellations attract kids more. Thanks to space missions by space agencies from various countries, we know a lot about space right now. In the future, we will also learn a lot about space and its structure. Kids get excited to learn about new space development. It is where they can run their imagination without the constraints of reality. That is why alien movies have always made kids drop their jaws in awe. Moviemakers love to incite our curious mind by making films on aliens. Watching alien movies with kids is fun because it allows you to run your imagination like a kid. Yet, you cannot watch every alien movie with your child. Also, finding the right alien movie is a bit tough. Here is a list of alien movies that you can watch with your child. Advantages Of Watching Alien Movies For Your Kids

You will be wondering why you should allow your kids to allow watching alien movies. It certainly has some benefits for your child if you select the right alien movie. Let’s take a look at some of those benefits.

6 Best Alien Movies That Your Child Can Watch

This 1986 movie is the sequel to the 1979 film Alien. Ellen Ripley,  a warrant officer aboard the Nostromo, a spaceship en route to Earth from Thedus in the first alien movie is sent back to the planet LV-426 to establish contact with a terraforming colony. Once there, she encounters the Alien Queen and the rest of the movie is the fight for survival.

E.T. the Extra-Terrestrial is a story of an alien accidentally failed to reach the spaceship and now finds itself on earth. The government agencies are on a hunt for this alien. Elliot, along with his siblings, helps this alien to recover his spaceship and go back to its world. The story of this movie is very heart-touching. You can see the inspiration of this movie on various other movies created afterward.

The Iron Giant is an animated movie that will make your child excited. The young boy Hogarth Hughes becomes friends with an alien. The alien is very innocent. Yet, a crazy government agent is trying to obliterate it. This alien resembles a gigantic robot. The gripping story of this book is something your child will enjoy.

Stitch is a genetically modified creature that is the creation of a scientist. It longs for freedom from the beginning. On one occasion, it finds freedom by escaping. It comes to Earth and impersonates being a dog. The adventure story of Lilo and Stitch will be very much enjoyable for your child. A truly inspiring tale, Lilo & Stitch secures a place among the all-time best Disney classics, as well as the best-animated movies.

Flight Of The Navigator

The story of the movie ‘Flight of the Navigator’ revolves around a boy named David. After waking up in the forest when he got knocked out, accidentally, he realizes that eight years have passed. What is more astonishing is David did not age in those eight years. David unravels the entire mystery when a NASA scientist, Howard Hesseman, helps him.

Megamind is an exciting movie to watch with your child. At first, Megamind is portrayed as a supervillain who kills his enemies easily. However, Megamind has to turn become a hero from a villain because the superhero he created becomes evil, and he has to stop that evil. Taking a fun, child-friendly spin on the Superman mythos, and delivering amazingly on it with a comedic twist, Megamind has earned its place as one of the best, all-time classics in the animated movie genre, as well as the comedy genre.

Constituting a total of 9 main titles, two side stories, and even animated movies in a fan-favorite Universe created by famed director George Lucas. Star Wars is a long, legendary saga that has been running for around four decades. A brilliant tale of oppression, rebellion, an ancient and powerful religion, and the biggest message delivered by the series: hope. This is the best entry for your child into the sci-fi genre, and will grow to be a childhood favorite!

Lifesaving Tips To Help You Sail Through The Third Trimester

There there! At the homestretch! You have sailed the two trimesters of pregnancy- with hues of happiness and anxiety, discomforts and some beautiful moments like those first baby kicks. Now you are in the final run and your world has already changed completely. And it is only a couple of months now that you will be holding your precious angel in your arms. The last trimester can set off a whirlwind of emotions, and physical discomforts are at their zenith. However, these are also the most vital months for you and the baby. And here are some helpful tips that can help you sail smoothly through the last trimester of pregnancy. 12 Awesome Tips To Help You Sail Through The Third Trimester Smoothly Start with YOU: As crucial these months are for your baby's development, they are also important for you. You need to take care of yourself more than ever before, and the more you take care of yourself, the better you take care of the baby. Do not stress yourself on the things that you are no longer able to do. Take ample rest, and place your comfort before anything else. On weekends, indulge in reading and long baths, bond with your baby and spouse and spend some quality time with.... 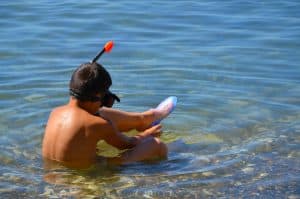 When you go to the beachside with your kids, you pack many things, including swimming costumes, sunscreen, and tents, to protect your child from sun rays. But, what about the feet of your baby? You might think that flipflops will work just fine. But, flipflops can get lost in the water. The regular shoes are not an ideal choice as they will absorb water. So, what can save the feet of your baby from the searing sand of the beach? It is where Swim Shoes For Kids come to the rescue of your child. These shoes are ideal for protecting your child while playing on the beach.    What Is Swim Shoes For Kids? Swimming shoes are the best footwear when you are planning to get into the water. These shoes are made from materials that do not absorb water.  So, they will remain light in weight even in the water. It will allow your child to move freely in the water. Thus, swimming shoes are the ideal thing to wear when you are going into the water. Why Do Kids Need Water Shoes? When your child is going into the water, you should make sure that he or she is wearing water shoes. Your child will be able to swim in a much better way after wearing water shoes. As the water will....

Getting your baby to sleep through the night is big task for the parents. During the newborn days, you have no choice but to feed the baby whenever he wakes up. This gives you many sleepless nights. However, once the infant grows a little say when about six months old or more, you can consider training your baby to sleep without your help. Here, the 'Cry-it-Out' method might be helpful. In fact, hearing your baby crying is not that easy and the 'motherly instinct' is to calm the crying baby. But a lot of mothers would do anything to get a good night's sleep and this is where the cry it out method will come in picture! What Is The Cry-It-Out Method? Cry-It-Out Method (CIO), as the name implies, does not mean that you let your baby to cry forever. It is a way of training your baby to sleep on his own. In this technique, for a certain time you let your baby to cry and then you go and calm him. With the help of this method, eventually the baby will learn to self-soothe and fall asleep rather than waiting for the mother to rock him to sleep. This is actually another milestone in the baby's development. What Is The Idea Behind Cry It Out Method? This method works on a simple logic.....

Eating Out With A Baby

After spending laborious nine months waiting for the baby, full of restrictions and precautions, it's but natural to capture a welcome change in the form of outing or dining out! However, it's not easy to have a gala time with a frail figure in your arms. Unlike you, your baby is not going to be served at the restaurant and may feel uncomfortable in new ambiance. You may also feel skeptical about breastfeeding your baby in public and rather turn down the dinner invite. Read below to counter this dilemma and enjoy your meal: 5 No Stress Tips For Eating Out With The Baby: You cannot control your baby's mood or need to fill his tummy, so in addition to praying, be prepared to feed him when dining out. Below are a few tips to ease out your dining experience: Choose the right place: Choose a baby friendly restaurant and reserve in advance; babies can easily become cranky! Let go of tempting 'couples' only' places that are dim and have crystal all over. Opt for places that have open spaces, some aquariums and plenty of room to walk around. Check if they offer high chairs. Infact it helps if you take a corner table! Do not deviate from the baby’s eating schedule: Hungry babies....