What Is An Anterior Placenta?

The state of a placenta and its position play an important role in pregnancy. Before understanding anterior placenta, you should know how the placenta does develops.
When the fertilized egg gets implanted in the uterus, the placenta will start to develop at that very spot after a week. By the end of the first trimester, the placenta will be fully developed.

What Is An Anterior Placenta And How Does It Form?

Does Location Of Placenta Make Any Difference In My Baby’s Development?

No, an anterior placenta doesn’t make any difference in the development of the baby. The baby does not care whether it is in the spinal side or your frontal, as long as she is all cushioned up in the placenta in the uterus.

How Does Anterior Placenta Get Diagnosed?

Your anomaly scan at 20 weeks will reveal the anterior placenta and the sonographer will note down its position as one of the following:

What Difference Does An Anterior Placenta Cause To Me And My Medical Examiner?

Having an anterior placenta will create issues for you and your specialist, though not so much for the baby. Let’s see how:

These are not as simple issues as they sound. Because noticing the movement of the child is vital during pregnancy. Similarly, listening to the heartbeat of the baby is also very important for your doctors. Amniocentesis is very important if the mother is over aged (above 35 years) or possesses a previous history.

When Should I Worry About My Anterior Placenta?

If you are diagnosed with anterior placenta during anomaly scan it doesn’t mean that it is time to worry. This is because the placenta often migrates during pregnancy. That is, even though the placenta is implanted in the anterior position, there are still chances that the placenta will get carried upwards to the posterior position as the uterus grows. The doctor will go for a repeated scan between 32nd and 36th week of pregnancy to confirm the position of the placenta. Even the scan during 36th week shows no change in the position then you can confirm an anterior low lying placenta, which is not a good news.

Although the placenta is protected by the thick wall of the uterus, abdominal wall and abdominal muscle, an anterior placenta is more vulnerable in case of getting a hard blow in the stomach because it is closer to the surface of the abdomen.

What Are The Complications Of Having An Anterior Placenta?

Anterior placenta generally doesn’t affect the health of the mother during pregnancy. But during labor and delivery anterior placenta can cause complication when it grows down instead of growing up.

Complications Of Anterior Placenta During A C-section

The low lying anterior placenta can cause complication when you are supposed to undergo a planned or emergency C-section.

But once you have to undergo an emergency caesarian with no time for an ultrasound scan, you will fall under higher risk of bleeding at birth. Making arrangement for blood supply if needed should be taken care of.
Now let us go through some research results before signing off, though the reasons are yet to be found out and proved:

All the risks arise due to anterior placenta are manageable nowadays. So leave the worries to your doctor and enjoy your pregnancy with proper care and also following the guidelines of your doctor.

Motherhood not only brings along lot of joy and happiness but at the same time it is filled with sleepless nights and tensions. As a mother you start getting worried when your little one develops a stuffy nose, is restless and in pain and when he begins continuously crying without any prominent reason. One of the most common reason for discomfort in babies is stomach pain. So the next time if your little darling begins crying continuously and even rejects breast milk or feed during this period, you could consider stomach ache as the culprit. Tummy aches make the little baby extremely cranky and restless which can be a difficult situation for you to handle. You may feel helpless and frustrated and may not know what to do in such circumstances. Don't worry, here we bring to you 5 common causes of tummy ache in babies and ways to cure them. Causes And Remedies For Stomach Ache In Babies Tummy ache in babies can be a result of a number of factors and as a first time mom it is natural for you to panic when you see your baby crying in pain and restless and you are unaware of the cause of your little darling's tummy ache. Stomach pain in infants can be triggered by a lot of factors..... The first few months after the baby is born is a tough and challenging time for both the mother as well as the baby. The infants do sleep for longer durations; however, the time is unfortunately not in favor of everyone. Babies tend to take sufficiently long naps during the day, which is why they, and by extension, their parents, have long sleepless nights. Mothers, in particular, may feel depressed and downright irritated because of this, as it upsets their whole routine. The parents have no choice but to find ways to catch up on their sleep, while also put their babies to sleep. [caption id="attachment_27833" align="aligncenter" width="542"] 5 Sleep Mistakes New Parents Make[/caption] In this process which is indeed a stressful time especially for the mothers as this is the time when they wish to get cozy and comfortable in the bed and have a good sleep, but the baby instead wants a feed, a burp, some attention so they start crying, looking for some cuddle time. Unfortunately, one cannot be awake the whole night not can you forcefully put the baby to sleep. Yet there are times when one must walk through the night to put the baby to sleep and this is where they end up making.... 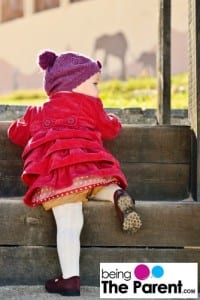 A fifteen month old baby develops a love affair with the word “No”, and loves to dig into books – though when at a later age you will want him to, he will not be as interested! Around this time, the baby is likely to discover the strength that he possesses. He would go great lengths to explore the world around. Nothing is safe from the clutches of your child at this age. Once the baby is able to stand without any support, even shelves and drawers at a height are not safe from the baby. Be careful to place your medicines and sharp object at high places. On top of that, it is important that a person is attending your child throughout the day. What most babies can do By the fifteenth time, most babies are likely to walk smoothly. The initial hesitations and fumbling should be behind him/her by now. He/she can be expected to be fussy about the food that is being offered, though this is not universal. However, it is always good to try out different combinations of food to keep him/her interested and ensure complete nutrition. At this age, a child can be introduced to ball games. Many children would follow a ball around incessantly without succeeding in catching it. He/she can be....

What To Do When You Don’t Feel Like Eating During Pregnancy?

If you have always associated pregnancy with cravings and loads of cream and cheese, you might be in for a shock when you get pregnant. The general image of a pregnant woman portrayed on the big and small screens is of someone who is allowed to "eat for two people" and who wants to eat all the time. A steady weight gain in a pregnant woman is a cause for celebration. However, reality is not always that rosy, thanks to the loss of appetite and nausea a good many pregnant women go through. If you are pregnant, and if you do not feel like eating, it can be a major cause of concern, mainly because pregnancy is that phase of your life when good nutrition is of utmost importance. So, what do you do? Read on. Why Don't You Feel Like Eating During Your Pregnancy? How Can I Get Enough Nutrition When I Do Not Feel Like Eating During Pregnancy? What Will Happen To My Baby's Growth If I Don't Eat? Why Don't You Feel Like Eating During Your Pregnancy? Loss of appetite and nausea are very common during the first trimester of any pregnancy.The reasons can be multiple. It can be- Your body's way of ensuring no harmful food reaches the fetus Your body's response to all the hormonal....