When Can My Baby Sleep With A Pillow?

The official answer to this question is “not until 18 months to 24 months old”. But many parents would say that they have been letting their baby use a pillow from much before and there has been no problem as such.
However, we at beingtheparent.com do not recommend the use of pillows, definitely not until the child is atleast a year and a half, and would suggest that you don’t use it even afterwards. Why? Read on.

Why Are Pillows Not Recommended For Babies Under The Age Of 18 Months?

Did you know that a study estimates that between 1992 and 2010 there were nearly 700 infant deaths reported in the United States due to pillows and cushions. Needless to say that infants are babies younger than 12 months, and placing pillows or cushions in a baby’s sleep environment can actually cause fatalities. (Source1)
Suffocation during sleep is one of the primary reasons for SIDS (sudden infant death syndrome). Pillows, blankets, stuffed toys and so on inside your baby’s crib or in your baby’s sleep environment are all extreme risk factors. Infants are too small to move their head away if their nose is blocked and they can’t breathe. The risk of SIDS is highest in the initial six months. By the time they are six months, kids can roll over, lift their head and move it. However, even then, there is still a slight risk remaining until they are atleast 18 months old and definitely strong and intuitive enough to move around in the bed and find a position that is comfortable. This is the reason we would definitely not recommend using a pillow or a blanket until they cross the age of 2, though they are still best avoided.

Why Are Pillows Not Suggested For Kids Even Above 2 Years?

We said that we would not suggest using a pillow even after the child turns two. Why? Your child does not really need it, that is why! He or she is used to sleeping on a flat surface without any pillows for the initial two years of life. While we as adults cannot think of sleeping without a pillow, your child does not yet feel the same. They are fine without a pillow, they have been doing fine for over two years now – so why unnecessary introduce something that does not really add any “comfort”

in their sleeping? In fact, many parents say that even if they use a pillow, most often their children will roll themselves below the pillow and not really use it. So, there is no “need” to introduce a pillow after two. But you can if you want, especially if:

Is A Pillow Good For A Baby?

Given the dangers of suffocation and SIDS, pillows are best avoided till a child is atleast a year and a half. Even after he turns two, a child does not need a pillow to sleep comfortably – but he may want it nonetheless since everyone else is using one. One sleeps more comfortably with a pillow once the shoulders become wider than the head- and this is the reason adults like to use a pillow while sleeping.

How To Pick The Right Pillow For Your Child?

Let us first look at how NOT to pick a pillow:

Now, here are some tips to pick the right pillow:

Once you have the right pillow, you can start putting your child’s head on it during night times. However, there is, we repeat, no need to force him to use it. If he does not want it, let it be. If he slides off the pillow during sleep, let it be. If he is using it off and on, let it be. Please take your child’s lead in this matter. After all, it is he who is sleeping and he knows what is comfortable and what is not! Of course, like we said before, if the child has chronic cold or ear infection, then pillows might be a good idea.
Sweet dreams!
More on baby sleep and rest in our section here.

Pink eye or conjunctivitis is very common among babies. Even the newborns are susceptible to pink eye as they have blocked tear ducts, low immunity and they can get exposed to bacteria which is normally present in the birth canal during vaginal birth. Let's explore more about pinkeye in babies. What Is Pinkeye In Babies? In both the babies and the adults, the inner side of the eyelids and the white of the eyes are lined with a transparent membrane called conjunctiva. The infection or inflammation of the conjunctiva, which can be caused by microbes or mechanical irritation, is called conjunctivitis. The blood vessels in the eyes will become more visible when they get inflamed. This gives the characteristic red or pink color to the white part of the eyes. Hence the name pinkeye. How Common Is Pinkeye In Babies? Pinkeye mostly affects babies above three-month as they have low immune system. Sometimes newborns can also get it during a vaginal birth. Babies are likely to touch their eyes every now and then and are therefore more susceptible to get pinkeye. The infection generally begins in one eye, and then eventually spreads to the next eye. What Causes Pinkeye In Babies? The pinkeye....

The Power of Children’s Picture Books

Picture books have the secret power to teach children life lessons through storytelling while setting the foundation for literacy habits. The impact of these books can be profound so it is incredibly important for parents to introduce picture books from an early age. The Different Types of Picture Books Not all picture books are created equal. As is the case with any other type of book, there are different genres which appeal to different kinds of people. The situation is no different with these: Picture Book Biographies: Picture book biographies are exactly what they sound like; they take the lives of historical and inspirational people and turn them into a story for children to understand. They are great at presenting role models to young children. Picture-Only Books: These books have no words written in them and instead tell a story entirely through picture form. They are great for artistically inclined children who love to draw. Classic Picture Books: Even picture books have classics; these are the ones which last more than a single generation. Parents often read these books to their children because they remember the stories from their own childhood. Impact of.... 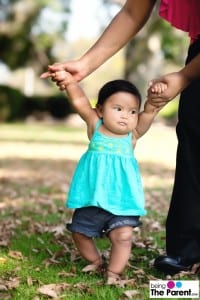 A baby’s first steps are a moment of rejoice for the parents and echoes independence for the baby. Once the baby learns to pull herself up for standing, she will soon start balancing herself on her tiny feet and take some baby steps tip-toeing – filling you with immense joy. Initially, she may not be able to control and balance her body perfectly. You may see her walking fast with no control or taking a few steps and falling down. By the time baby becomes one year old, her leg muscles develop and gain enough strength to support her while walking. After gaining good control over the standing position, the baby starts to cruise – from one support to another and takes a small step unconsciously between objects. If distracted, she may loose her balance and get toppled easily. A little practice here and your little one is set to explore! Babies love this new independence and are likely to hurt themselves while walking or learning to walk. Most of them start walking during 12-13 months of age. Make sure the area where your baby takes her small steps is safe enough to protect her. At the age of 15 months she would love to pull or push her toys along while walking. By the time she....

Guidelines For Taking Care Of Your Baby In Summers

Thanks to all the climatic changes, mercury is soaring this summer, even in the historically cool places. If you have an infant to take care of, then you might be full of questions on how to ensure the little one does not bear the brunt of this harsh summer. We have answered some of the most commonly asked questions for new mommies below: How Often Should We Use Air Conditioner In Baby's Room? How Often Should I Bathe The Baby In Summers? Should I Use Any Powder For My Baby To Avoid Prickly Heat? Can I Continue Giving Oil Massage To The Baby During Summers? What Kind Of Clothes Should I Use – During The Day And For The Night? Is It Alright To Use Sun Screen If I Am Stepping Out With My Baby? How Can I Ensure My Baby Does Not Fall Sick During Summers? How Do I Find Out If My Baby Is Feeling Very Hot? How Can I Keep My Baby Cool In Summers? How Can I Protect My Baby From Mosquitoes? How Often Should We Use Air Conditioner In Baby's Room? It is safer to put your child in an A/C room than in a hot and humid environment. This is because your infant cannot yet regulate his body temperature based on the outside temperature like we adults do. Their systems are....