Is Loratadine Safe For Nursing Mothers?

Is allergy driving you crazy? Are you feeling distressed from symptoms similar to cold – like, running nose, sneezing and watery eyes? Is itchy skin bothering you? Even if it is true that these common allergies are not going to threaten your life, there is no doubt that it is tiresome for you, especially, if you are a breast feeding mother.

These symptoms appear when the histamine level in your blood stream increases.

How Do Allergies Occur?

When you are allergic to something and the allergen (substance causing allergy) gets into your body, your body produces antibodies to fight the allergen off your system. For this anti bodies need histamine. Histamine is found in mast cells. Thus, antibodies persuade mast cells to release histamine. The role of histamine is to make the blood vessels to dilate so that WBC could quickly find and attack the allergen.
Too much histamine in the body results in the inflammation of inner layers of nasal passage and airways, throat, eyes, and skin resulting in watery eyes, sneezing, skin rashes, irritation in throat etc.

Loratadine, also known by the brand name- Claritin, is an antihistamine. As the name implies, it helps to reduce the histamine level as the increased level of histamine generates cold or allergy symptoms. Thus, Loratadine is used in the treatment of hay fever and other allergic symptoms like sneezing, skin rashes and itching. It will help you to discard the allergy symptoms faster and is easily available as an over-the-counter medication.

Does Loratadine Have Any Side Effects?

Usually, Loratadine has no side effects. Even though serious allergic reactions have not been reported, some patients have complained that their eyes turned red, or they developed a sore throat, dry mouth, or hoarseness. Some patients report of headaches.
Drug interaction- the effect of one drug on the other when taken together- happens when medicines containing desloratadine, which is similar to loratadine, is taken along with loratadine. It is also not safe to take loratadine with certain medicines which are antifungal and with medicines which are used for acid-reducing. Whenever you feel uneasy while having a medicine, even that reports no side effects, do consult your doctor before continuing that medicine.

It is safe for you to take loratadine in small doses in unavoidable situations. It has been considered widely safe for breastfeeding mothers.
Even though non-sedating antihistamines are long acting (effects last for a long time), doctors prefer non-sedating antihistamines over sedating antihistamines for the allergy treatment. Loratadine is a non-sedative antihistamine. So, they are less likely to sedate the baby.
If you are worried that the drug could be passed into breast milk to the baby, you should know that the amount is extremely low. It has been found to be less than 1% of the mother’s dose and is considered too little to affect the baby. However, you should always monitor your child for drowsiness or any other changes if you are taking any medicines even, the medicine is said to be relatively harmless.

Antihistamines can make a mother’s milk production go down, but there has not been considerable research on the subject. In a study done in 1999 and 2001 by a teratogen information service, it was reported that only 1 woman out of 51 reported a decline in her breast-milk production after taking loratadine. She had reported the dosage of 10 mg daily after 4 months of delivery and for less than a week. Hence, limited research suggests that no considerable effects on breast milk production.

What Are The Alternative Remedies For Allergic Symptoms?

If you are a breastfeeding mom, chances are that you do not want to take any medicine that would have harmful effects on your baby. Try non-oral medication to minimize your state of discomfort due to allergic symptoms. Some of those alternatives are:

Avoiding combination medicine is always good. Take treatment only for the symptoms that bothering you. For example, you may not have to take an antihistamine if you only have a nasal congestion. A nasal spray might do the job neatly. If you are badly in need of medication always take it right after you nurse your baby. This will again reduce the chances of baby’s exposure to the medicine through breast milk. 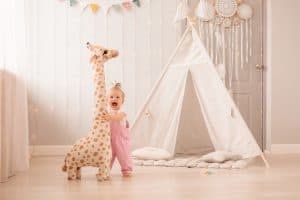 Games are synonymous to the babies. Babies love to play, and playing with the babies also helps the parent, and the child is bonding with each other immensely. It is even a great way to teach the child some valuable lessons as well. In present times, there are a variety of games that can be seen in the market, which are focused on cognitive learning, motor skills, hand-eye coordination, etc. These games solve the dual purpose as kids get to play and even learn and benefit from it as well. The games are not only confined to babies but can be played by all types of people, could be of any age. Baby games are even played by the to-be -mothers when they are expecting a baby. This is yet another way for the mother to know the baby and prepare herself for the next phase. These games are referred to as baby shower games. Apart from these, there are some gender-specific games that are played by boys and girls, hazel games that help in teaching the kids the basics like dressing, cooking, cleaning, etc. Apart from that, there are baby shower games that are printable as well that come handy while we organize a baby shower. We shall be discussing them in brief now. Baby Shower Games ....

How To Choose Your Child’s Pediatrician?

When is the right time to look for a good pediatrician for your child? Before the child is born. Yes, that is right. Since your child needs care from day 1, it is ideal to zero in on the pediatrician sometime along your third trimester. We know what you are thinking. You did so much research just months ago to find a good gynecologist, and here we are asking you to research for a good pediatrician already! When Should I Start Searching For A Pediatrician? Choosing a pediatrician for your baby should be a well informed decision, and a one at which you arrive together. Some people already decide the doctor even before they conceive, while some others start looking for one during the course of pregnancy. It is, however, recommended that you zero out on your child's doctor atleast 3 to 4 months before your due date. What Kind Of Doctor Should I Choose For My Child? You can opt for a pediatrician who specializes in child care and children's health. Because he will be practicing with children, he will surely be well-versed with all aspects of child care. Some people prefer the family doctor since the doctor is aware of the family history, genetics etc., but you must also ensure that he....

When you are pregnant you need to be extra careful about the food that you are eating. The diet you are consuming should not only be providing enough energy and nutrients for your baby to grow and develop, but should also be healthy and hygienic. The food you consume should be free from various type of harmful bacteria. During pregnancy your immune system gets weak and you become more vulnerable to the germs that cause food poisoning. So while making your food choices you should take some extra precautions and care. Just to guide you below we have gathered all the important information about food poisoning during pregnancy including how to treat and be safe if you already have it. Food Poisoning During Pregnancy Food poisoning is a sickness or illness which is caused by consuming contaminated food or water. In most of the cases it is not fatal but if the symptoms are severe and persist for a longer period of time than they may cause certain risks for a pregnant woman and her unborn child. Though it could be slightly difficult to figure whether you have contracted food poisoning or its your nausea or morning sickness, it can be determined easily by some simple tests. What are the....

Things Parents Should Always Have In Their Car

For some parents, travelling with their kids is a nightmare. The kids get cranky, they get motion sickness, they get demanding – all of which mean that as a parent you do not get one moment of peace inside the car. And then there are other parents who seem to love road trips with their children. Of course, some kids are just easier to manage during trips. That said, one thing that sets these parents apart is how well they stock their cars with things that they anticipate the kids will need during any travel.So, here goes, ensure you have the following items in your car. 15 Things Every Parent Should Have In The Car Towels: Extra towels always come in handy. If there is an accidental spill of water, you would need thick towels to clean up the seat and the kids. It is also an excellent sun blocker for the car windows (roll down the glass a little, spread out the towel over the rim and bring the glasses up) Band aids: Basic first aid kit is something you should always have handy, whether you anticipate cuts and bruises to happen or not. Band aids are definitely required. Additionally, you can also keep a roll of cotton, some antiseptic and cleaning alcohol Plastic....