What Will My Baby’s Eye Color Be?

Did you know that the color of your baby’s eyes could change after birth? I’m sure many mothers may either not be aware or may never have thought of this. But, the fact is, children inherit the color of their eyes from their parents too. What’s more interesting is that the color of the eyes changes over the first year. Afro-American, Asian and Hispanic babies are born with dark eyes and the color does not change. But Caucasian babies born with dark blue or grey eyes may undergo a change in color before they turn 1. So, here’s where the eye calculator comes in use where you can actually use it to predict which color will ultimately prevail. Before getting into the details of why and when the color of your baby’s eyes change, let’s first know what actually determines the eye color?

What Determines Eye Color In Babies?

Most babies with fair skin have light colored eyes. This is because they have very little melanin, a pigment that gives color to the eyes. Genetics control how much melanin a person will have. And the DNA your baby gets from you and your partner determines whether the color of the eyes will be green, blue, grey or black. Normally genes mutate to give alternate forms or alleles and three such pairs of alleles are responsible for the color of the eyes.

Where Does Eye Color Come From Mom Or Dad?

Human beings inherit two copies of genes, one from each parent. If both these copies match and are dominant, it is homozygous and if not and are recessive, they are heterozygous. Brown/green are normally dominant eye colors while blue is recessive. Therefore, if both parents have brown/green eyes, there is a 75 percent chance that the child will inherit this color. Alternately, because blue is recessive, it is highly unlikely that the baby will get this color if both parents have brown eyes. Therefore the mother’s and the father’s genotype (gene combination for a particular trait) normally determines the color of the eyes.

Can Parents With Brown Eyes Have A Child With Blue Eyes?

Yes, it is also possible that a baby whose parents have brown eyes may end up being blue-eyed. This is possible because one of the parents might have the genes for blue eyes dormant somewhere in their genetic makeup. This means, that this color which lay dormant in their parents must be from the grandparents. Also, because eye color is polygenic (a trait influenced by multiple genes working together), other genes can have an effect on the color as well.

While it may sound absurd otherwise, by the time your baby enters the 6th month and between then and the 9th month, it is possible that the color of the eyes may change. By this time, the iris has let out enough pigment for you to predict the final color that will be permanent. The change is so gradual that you may sometimes miss it until you are surprised to find your baby with a new eye color. In fact, in some children, the eye color may change until they turn 6 years. This does not happen often though. At the time of birth, there is a deficiency in melanin which gets better with time and therefore the baby’s actual eye color begins to appear.

When Should You Talk To Your Doctor?

All this information is not meant to overwhelm a new mom who is basking in the new found happiness. It is aimed at creating awareness on an issue that is not much talked about. Ultimately it is genetics that determines the color of the eye; it does not depend on how much your baby eats or how much light they are exposed to. So, don’t worry much unless you notice something completely out of the ordinary. 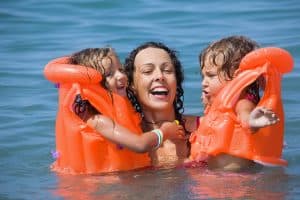 Summer season is kid’s favorite as they get to play in the water, eat ice creams, and because they get maximum holidays as well. This is also the time when they get maximum family time, and being in the pool refreshes them thoroughly. Summer fun is important, but along with it comes the safety of the infants and toddlers, and if proper precautions are not taken, it can lead to drowning as well. Reports have shown that most infants and toddlers drown within the home swimming pools and not the regular ones as there are safety tips taken care of. However, at home, not many do cater to the safety as they feel kids are safe. Apparently, drowning is the main cause of deaths that happen by accident in the last few years. In case the safety precautions are taken care of, the kids can be safe while they are playing inside the water. One could possess a spa, a pond, a pool, or a hot tub, but safety for each is a must. Supervision: Infants and toddlers are always on the move and are too small to understand what is safe for them. As parents and guardians, it is our duty to be alert and cautious with kids as a slightest of mistake can lead them to troubles. Supervision always is a must,....

How To Handle Your Newborn Baby Visitors?

A new born baby is always a delight to the family and relatives. It is a time for joy and celebration for all the families concerned. Many visitors and relatives prefer to visit the baby while you are in the hospital, and some will pay you a visit once you are home. The flock of visitors can be over whelming at times, as they both mother and baby are trying to cope with one another. Some relatives and friends come at home at odd times. Though everybody has good intentions and mean well, things can get chaotic, when you are dealing with pain, baby blues, lack of sleep, change in routine and over all discomfort. Although you cannot shun out the visitors and friends, who are there to see the new born baby, you can always make sure that your and baby's convenience comes first. How Can I Manage My Newborn Baby Visitors? Here, in India, we have our parents or in laws to help the new mother take care of the baby and manage the visitors. Plus the mother has to follow the 40 day confinement period in some cultures, so visitors often become the responsibility of other family members. But there are instances, where new mom and dad are away from the family and sometimes they have to manage.... 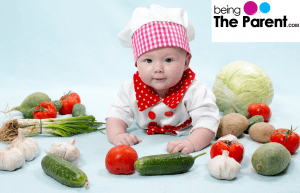 New parents are often on the lookout for different ways, especially those that are natural, to take care of their baby's health and nutrition. They also worry about the safety of giving anything and everything to their babies even though they knew it is healthy. If you are not sure incorporating garlic to your baby’s diet, or how to when to introduce garlic for babies, this article will help you.  Continue reading to understand more about the health benefits of garlic for babies, a most popular ingredient in almost all type of cuisine not only due to its strong flavor but also due to its medicinal value. [caption id="attachment_27662" align="aligncenter" width="538"] 5 Amazing Health Benefits Of Garlic For Babies[/caption] When Can Babies Have Garlic? Here is an interesting fact. Babies start to consume garlic way before they start solid food! Wondering how? If you are consuming garlic while breastfeeding, the flavor of garlic gets into the breast milk thereby changing the flavor of breast milk as well. Most babies love this flavor. However, if the baby is experiencing any discomfort due to ingesting garlic, you will be able to see it soon enough. Doctors recommend parents to.... Tips On Massaging A Baby

Massage not only relaxes your baby but also strengthens her muscles and leads to good sleep. It has several other benefits too. There is a correct way of massaging infants which should be followed for maximum benefit. Massage should not be given immediately after feeding or if she’s tired and feeling sleepy. The baby will be more willing and co-operative if you tune in the massages as per her moods and you will not have to struggle. Considering massage at the same time each day is good (as baby knows what to expect) but may not always work with these little ones. Some simple tips to massage a baby- You can massage your baby on the bed, changing table or on the floor. Sitting on the floor for the massage with the soles of your feet together making a diamond shape with your legs is the most common and comfortable position for massaging your baby. Take oil for massage in a container - you can heat it a little if you like. Once you sit in the above mentioned position, drape a blanket or a thick cloth or towel over your feet. Now undress your baby and make her lie down on the blanket, resting her head on your feet.(once you make diamond shape as explained) Using oil....