Are you pregnant again? Many congratulations!! If you feel that you have been there and done it before, you are most likely familiar with the baby protocol. However, this time it’s not the same as before, there is someone else you need to prepare for the new addition to your family too……yes your older child.

“There’s a baby in Mummy’s tummy”… Seriously? Your child might not have the least clue on what you’re talking about, though this depends on his age as well. While others offer a hug or a very happy congrats message , telling the older child that there is someone else also who will be living in the house, requires some etiquettes. Here’s how and when to spill the beans to the older child when a baby is arriving. 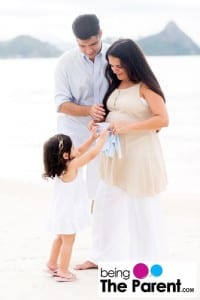 Some suggestions so as not to make your first child feel insecure.

When you have made up your mind to share the news, the best time would be when the child is quite relaxed and playful. The parents should be together. The kind of reaction you receive only depends on individual child!