Understanding your baby’s gestures is a tough and crucial thing, mostly when he/she is unable to utter words. His behavior and body language often tell a lot about what he needs or what are the things that are disturbing him. In his book “Your Baby Is Speaking to You”, J. Kevin Nugent explained that you can keep your little one happy if you recognize his/her sign language.

Clenched fists are one of the many signs your newborn depicts during the initial months after birth. Parents often consider it normal, and it actually is but there are some messages in it which you need to understand. If you want to know about it and understand your little VIP, stay till the end.

What are the Reasons for Clenched Fists in Babies?

First of all, this is a very common observation that your baby clenches his/her fists most of the time and there are no such things to worry about. But below are some causes that are associated with this activity.

This is a reflex of the neurological system in babies, and it is very strong. Commonly it is called palmer grasp. Your baby is not doing it willingly, it’s a reflex arc. This reflex gets activated whenever something is there in their palm and the fingers automatically grab the thing tightly.

As per the Centers for Disease Control and Prevention (CDC), often this is considered as a sign newborns show when they are hungry. Although gradually from their frantic and loud cries, you can identify their need for a meal. And if you notice properly, you can see that the fist clenched at the same time.

As per studies, sometimes, due to neurological disorders in children, they keep their palms closed all the time. This disorder is known as cerebral Palsy. In this case, a part of the brain, which controls the motor function, gets affected and as a result, the baby cannot properly control body movement, balance, posture control, reflexes etc. There are some other symptoms of this disorder like weakness, poor control over the muscles, slow reflex, rigid leg and arm muscles. This Cerebral Palsy may be caused due to the below reasons.

After staying long in the mother’s womb, the baby has an instinct to stay in the same position even after birth. They imitate the same posture to be in a curled and closed-palm position during the initial days of birth. Gradually, it becomes normal when they start holding things with their hands.

After birth, the baby has an immature nervous system. This is not fully operational and tries to accommodate the outside world. Therefore, the signals from the brain to other body parts including palms and fingers improve gradually and till then, the mirroring of the inside-womb remains.

As per the study of NCIB, the Thumb-in-fist (TIF) position or commonly clenched fist position is common and can automatically go away by 7 months of age.

How Would It Be if Babies Don’t Clench Their Fists? Researchers say that before birth, the amniotic sac is the most crucial and delicate part, not the baby. The amniotic sac is a thin biochemical membrane with a lot of complex compounds in it. This is the place where the baby stays and gets the essential nutrients for its growth. During the pregnancy period, if the baby does not clench their fists, the hand movement may pinch or scratch this sensitive sac. This can lead to a release of hormones and chemicals and as a result, premature labor may happen. Therefore, by the magic of mother nature, babies generally stay in a clenched-fist position inside the womb.

According to studies, there is another congenital phenomenon known as amniotic band syndrome, which has an adverse effect related to fist-clenching issues. For some reason, thin strands of the amniotic sac are peeled away and move around the baby in the amniotic fluid. Sometimes, these strands wrap around different body parts like fingers, arms, legs and may cause serious injury to the unborn. Though the exact reason for such strand peel-off from the amniotic sac is not clinically known, the phenomenon may affect the neurological reflex or palmer grasp on the baby. Therefore, they cannot clench their fist.

[Read: Development of Grasping in Babies]

How Soon Do Babies Unclench Their Fists and Use Their Hands? As we discussed earlier that clenching fists are pretty normal and common for newborns, they automatically start to unclench their fists, no need to worry about it. With the development of the nervous system, your baby will start relaxing and keep its palm open. This thing generally happens from 3 to 4 months of age. And when they cross the age band of 5 or 6 months, they start using their hands to grasp objects. When the brain starts maturing, the control and coordination between the brain and all the body parts significantly improve and your little one can do proper eye-hand coordination to play with toys.

Before they start to grab or hold any item, they start to recognize colorful toys and objects, smiling faces and get attracted to those items. Later try to feel those things with their hands and that’s the time they unclench their fists intentionally.

1. Is it Normal if My Baby Clenches His Fist Before Feeding?

It is absolutely normal and this is a sign of hunger that your baby, depicts during the initial months of birth.

2. When Does My Newborn Use His Hand?

With the gradual maturity of the nervous system and senses, your baby will automatically understand when to use the hands to grab things. In general, by 5 to 6 months they start to identify objects and stretch their hands to grab them. But do not worry if it takes some more time.

3. How to Help Babies to Release Their Clenching Fist?

Along with the development of the organs and brain, your baby automatically will start to get relaxed and release their fists. You can also help him by introducing attractive toys, spoons, other lucrative items and allow them to feed themselves on their own.

4. Why do Babies Generally Clinch Their Fists?

The primitive reflex of being cuddled inside their mother’s womb is one of the main reasons for clenching fist. Another cause is hunger and stress due to it. For more information, please go through the article in detail.

In most cases fist clenching is normal. Over time, their nervous system matures and automatically they establish coordination with every body part along with the finger and hand. Don’t worry if it takes a little bit longer as every baby has its own speed of response. But it doesn’t hurt to consult your doctor if you find any concerns. If the situation does not change after 6 to 7 months, it is recommended to see your pediatrician.

Read Also: When Will My Baby Develop The Pincer Grasp? Tofu For Babies: When To Introduce And Health Benefits 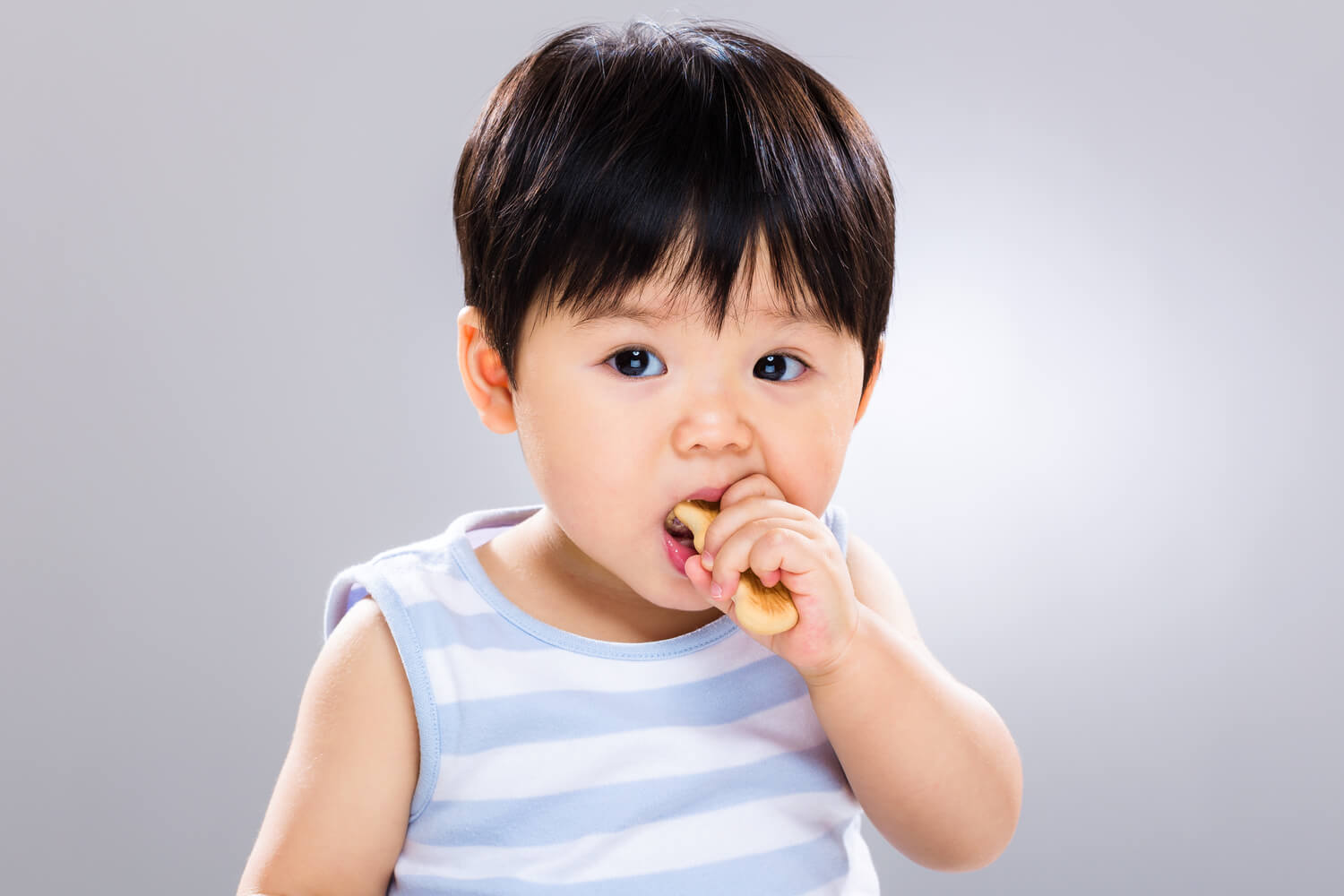 Colicaid Drops Vs Gripe Water – Which is Best For Your Baby?