When a woman decides to be pregnant, a lot of things like her body shape, her daily routine, her body functions, and many more activities change a lot. With the increase in the size of the womb, many other body parts of a woman change to a very extreme extent. The nipple is one of those parts. Changes in the nipple are one of the early pregnancy signs. This article will provide you with a summary of the transformation of nipples during pregnancy, the occurrence of white spots on nipples, the story behind darker nipples in pregnancy, and how they look during early pregnancy. This article is an overview of nipples during early pregnancy. 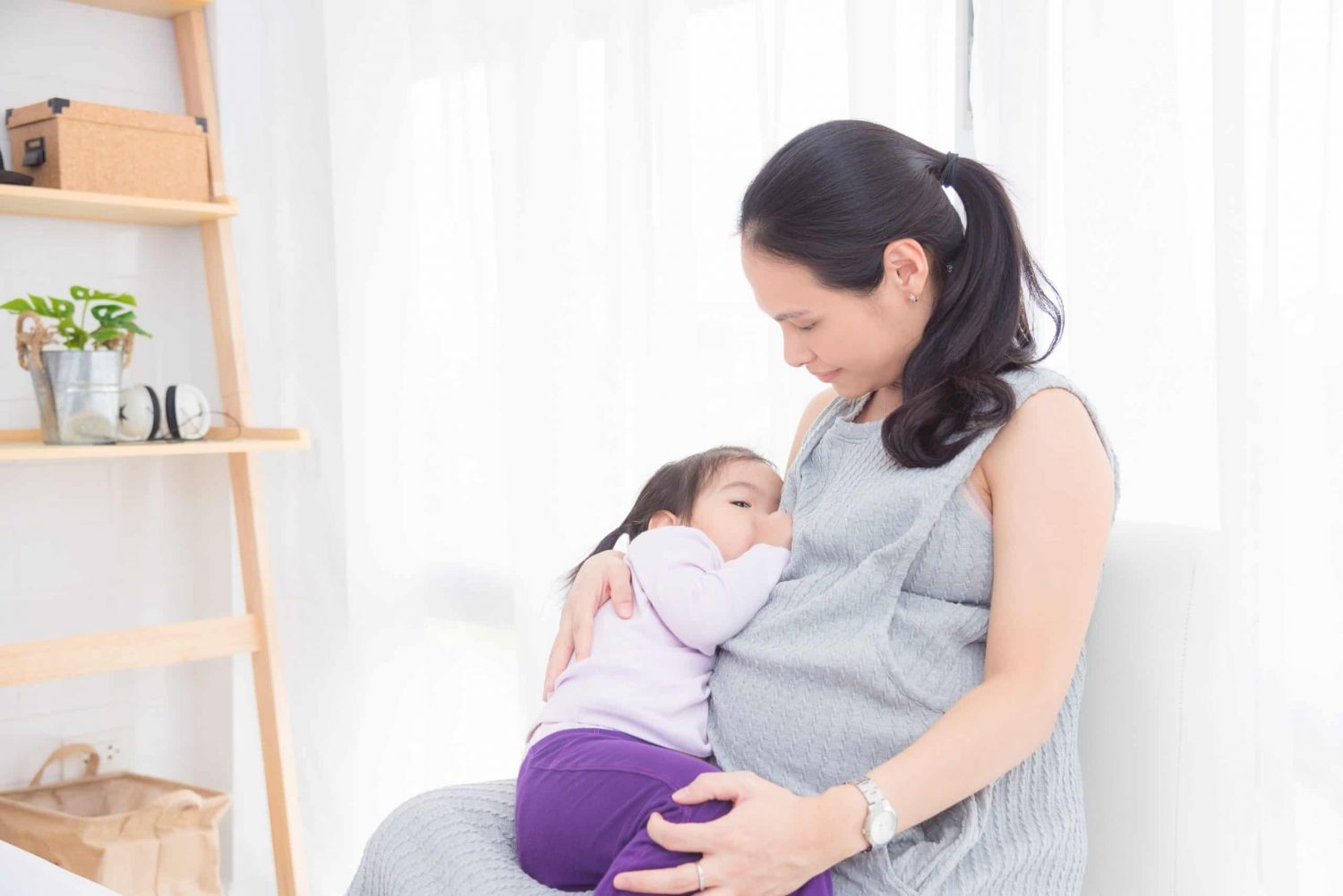 Different factors bring about nipple changes during early pregnancy. Some major factors are the surge of pregnancy hormones, increased formation of breast tissue, and changes in the fat in both breasts and nipples. In the meantime, some researchers believe in another theory. It states that the darkening and enlarging of nipples are a part of the evolutionary change. This change is natural means that helps newborns locate the nipple for feeding. Whatever the cause is, you should expect your nipples to get progressively darker throughout your pregnancy. It will be the darkest at the time of delivery.

Do Your Nipples Change In Early Pregnancy?

It is very common in pregnancy that the nipples during pregnancy start changing. Almost every woman experiences this change in breast structure during their first trimester. In fact, it is one of the major signs of early pregnancy. The size of the nipples increases gradually and is having a rapid growth in the early weeks of pregnancy. This happens due to the change in hormones during pregnancy leading to this change in breast structure. The growth of nipples stops after the first month of pregnancy, and in some women, it stops after the childbirth only.
So changes in the nipples are obvious during early pregnancy because it is a major pregnancy sign.

Change in the size of nipples starts occurring at the beginning of pregnancy, i.e. from the 1st or 2nd week of pregnancy. The breasts start feeling swollen, and some women even feel tiredness. While others even feel the pain when their breasts grow up. A nipple growing during the phase of pregnancy is quite common and a general part of pregnancy. It is not at all a matter of concern until you feel something is wrong with you.

Some women start feeling their breasts getting bigger between 1 to 12 weeks. You may even feel changes in the size of your nipples. You will also notice suddenly your nipples are turning more sensitive.

You can easily notice the change in your breasts and nipples during this trimester. You can observe the veins under your breasts’ skin very easily. In fact, in the second trimester, you can also observe the release of colostrum (the liquid type, which is yellow in colour). It is also known as pre-milk, which helps in discharging unhealthy mixtures in your breasts, which is not good for a baby to consume while breastfeeding.

Do All Women Nipples Get Darker With Pregnancy?

It is one of the major and visible changes during pregnancy. The skin around your nipple, which is known as areolas, starts becoming darker and even grown larger in area. The growth of the Montgomery gland makes this is the skin around nipple grow darker and bumpier. The Montgomery gland secretes the oil which helps in lubricating your nipples and breasts so that they do not get dry and do not bother you will breastfeeding. The areola is surrounded by pigment areas whose production starts getting higher while a woman is pregnant. That is why your breasts increases in size and your nipples become darker during pregnancy. So nipples getting darker during pregnancy period should not bother you, and you should understand that this is not at all a matter of concern.

What Are The Bumps On My Nipples?

When Montgomery glands get swollen, they appear as little bumps on nipples. These pimples mostly appear around nipples or near the darker part of the nipple. It is said that these bumps or pimple should not be pushed or squeezed; otherwise, it can lead to dangerous infections.
The Montgomery glands swell in two conditions

Montgomery glands secrete oil, which never lets your skin go dry, and sometimes this secretion forms a pimple and appears around or on the nipple.

When I Squeeze My Nipples Why Do I See White Spots?

Everything of your wonder is not a matter of concern. The same applies to those white spots on your nipples. They are not at all subjects of concern. These white spots are a result of the change in hormones in the women’s bodies or due to jamming of nipple pores while a woman breastfeeds the baby. Only in extreme case, these white spots can be due to infections.
These white spots are nothing but Montgomery glands that become more visible in pregnancy. The Montgomery glands also get highlighted during regular hormonal changes. Change in the Montgomery gland and an increase in the number of their visibility are also considered as an early sign of pregnancy.
Some Final Words
Many signs like spotting, cramps and other pregnancy-related symptoms in the nipple are also an early sign of pregnancy. That is why doctors always suggest that when a woman is pregnant should not ignore personal hygiene. Otherwise, such major changes in pregnancy can lead to infections, which is unhealthy for both the mother and the little one who is yet unborn.
Always remember that you may even feel very sudden changes in your body, but that doesn’t mean that something is wrong with you. You have to understand that these changes in your body are natural.

One of the most precious moments in a woman’s life is pregnancy. And this time you need to be most conscious about your health and wellness and keep a close eye on your food habits. Garlic is one of the most discussed herbs to be consumed during pregnancy. This is widely used in many Indian recipes as well as worldwide. But is it good to eat garlic during pregnancy? If yes, then how much is safe? What are the pros and cons of eating garlic during your child-bearing period? Let’s discuss all these points in detail. Is it Safe to Eat Garlic During Pregnancy? How Much Garlic Can You Eat During Pregnancy? 8 Amazing Benefits of Eating Garlic During Pregnancy Side Effects of Garlic During Pregnancy FAQ's Is it Safe to Eat Garlic During Pregnancy? Garlic is rich in nutrients, minerals, and vitamins which are essential for your body. It has some antibacterial properties too. Based on Human Intervention Studies, it has been found that the secondary metabolites present in garlic have excellent properties to prevent common diseases like cancer, cardiovascular and metabolic disorder, diabetes, and blood pressure. Many studies suggested that it is safe to eat garlic during.... From the time the pregnant woman conceives, the expecting mother starts to become more inquisitive. The first three months of pregnancy are very critical. Sonography during pregnancy helps to detect any issues at the right time. A scan done at fourteen weeks helps to: Assess the development of the baby in the womb Detect if the mother is having multiple pregnancies Detect the heartbeat of the unborn child Measure the length of the baby Sonography is the ultrasound scan performed by sending high-frequency sound waves to the uterus. These waves help in capturing the fetus's image. The ultrasound scans images help in revealing the bones and tissues and other developmental phases of the baby.     What Are The Different Types Of Sonography During Pregnancy? An ultrasound scan or sonography is the best way to assess the condition of the fetus inside the womb. The scan majorly helps in detecting any kind of growth deformities, any abnormal conditions and even the gender of the baby. However, in some countries like India, gender detection under any circumstances is a crime as well as it is illegal. In the present times, the famous ultrasounds or sonography....