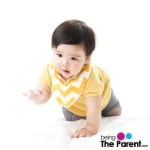 An eight month old baby is not that different from a seven month one or a nine month baby for that matter. They are always cuddly and delightfully cute. But emotions apart, it is important to observe the direction of growth of your child. Important cues need to be understood so that your child develops into an all round human. So far, as a parent you have done a great job of providing proper care and upkeep of your baby. From this point onwards, your role would not be to carry around the baby but instead providing the right environs where he/she can grow.

An eight month old baby can be expected to develop some advanced level of locomotion. This would involve the use of both set of limbs. By this time, every child should be able to sit unaided. Crawling should follow the task of sitting by a couple of days. Physically at least, an eight month old child can be expected to show at least a couple of pairs of teeth; the incisors at the very least. This would enable him/her to chew or gnaw at his/her food. This development also gives rise to the tendency in children to put random objects in his/her mouth. When not asleep, your child would seek to discover the world around him/her and will most likely crawl on all fours. At this age, you need to ensure childproofing of the house. The baby nursery should be designed in such a manner so that it is able to keep the child absorbed for lengthened periods of time. At the same time, it should be free of chemicals and sharp edged objects. An eight months baby should show prominent skills of expression of approval and/or disapproval. He/she may take still take some time to develop the requisite social skills but a beginning can be expected by the eighth month. He/she may be more open to unknown groups of people and may no longer cry in presence of unknown company. Some children may enjoy the affection that he/she draws from people. A smile of recognition becomes very common now. At the same time, enhanced vocal support would provide the requisite platform to express, and some maa’s and daas would be echoing in the house.

Though sitting becomes common for children from this stage onwards, shifting between the postures of sitting and/or sleeping may be difficult. Still, there would be some who may be able to achieve the above tasks. Besides, the ability to grasp objects and latch onto it is something that begins from the second month onwards. During this period onwards, a baby may try to lift himself up to a standing position with the support of something. This is also a time for bumps and falls.

What few babies can do

Becoming a parent is overwhelming. It's often something that we spend a long time looking forward to and preparing for - sometimes, far longer than the 40 weeks of pregnancy. But, no matter how prepared you think you are, when your baby arrives, everything changes. It's never quite what we expect, even when we're welcoming home our second or even third babies. It's more exciting, it's more work, and it's definitely more exhausting. It's just more. New parenthood is like an assault on your emotions, as well as your hormones. You are busy trying to take care of a new life, your hormone levels are off the charts, your whole world is turned upside down, and any hopes of a good night's sleep are long forgotten. It's no surprise that your mental health might take a hit. Here's a look at some of the things that you can do to boost your mental health in those astounding first days of parenthood. Rest When You Can One of the most unsettling elements of being a new parent is the tiredness. You thought you'd been tired before, but not like this. Even if your newborn sleeps well, they'll be up at least a couple of times in the night for feeds and changes, and you are unlikely to get more than....

Everybody Look at Your Hands

How to encourage children to wash their hands   Being a parent during the COVID-19 pandemic is incredibly difficult. That’s not exactly a secret: everything from school to social engagements to birthdays has been fundamentally changed in 2020. This year it’s all about keeping our kids safe while at the same time allowing them to have as close to a normal childhood as possible. Other than completely locking down at home, there are few options for keeping them virus-free. Masks are playing a critical role in safety for everyone, adults and children alike. That’s why they’re mandatory at most schools and daycare centers, not to mention on playgrounds and other public areas where large numbers of people gather. The other surefire way to keep kids safe is making sure that they wash their hands whenever they enter our homes, and if they frequently use hand sanitizer in public spaces. This all makes sense on paper, but we all know that kids have minds of their own. It is one thing to tell a child that he or she needs to wash their hands, but that doesn’t always mean that they listen. This sort of limit testing is part of a normal childhood, but in 2020, it can have....

We all know just how important it is for kids to get their recommended dose of active exercise. It is essential for fundamental development, especially in a child’s early years. Research also has proven that kids who exercise at a young age have a better chance of keeping healthy habits later in their adult life.   Getting enough exercise.   Children have varying degrees of energy. While some have what could almost be called endless energy, others may be more lethargic. This is particularly true today, where there are a range of devices to keep kids sedentary.   From smart phones, tablets, to video games and TV, getting a kid outside can be a challenge. But it’s an important aspect to their wellbeing. Physical activity guidelines outline that children and adolescents ages 6 through 17 years should do 1 hour or more of moderate-to-vigorous physical activity daily.   Make exercising fun   While these guidelines may seem impossible for some children, you shouldn’t lose hope! There are ways that can help you integrate exercise into your child’s life. One of the best ways of doing this is disguising physical activity as play.   Below....

What to Feed the Baby in the First Year

The first year is always critical for the new baby. What will she eat, what will she wear, how to keep her safe, vaccinations… these are common questions all first-time parents ask. Food is, of course, very important because it is directly related to the development and the child’s growth. Babies breastfeeding will take between 8 and 12 feedings in a day. Those on formula foods will need between 6 and 10 feeds a day. Usually, solid foods will be introduced when the baby is around 6 months. Always remember, nutrition is key in the 1st year. Make sure to start a healthy eating habit quickly for your infant. But the feeding must always depend on the readiness of a child because every baby is different.     How Often an Infant Must Feed They are still very small, but they can know when feeling full or hungry. Feed her whenever she feels hungry. Each breastfeeding session is usually between 10-15 minutes. Formula and breastfeedings can be done deep into the night as well if the infant wakes up and cries because she is feeling hungry. Some parents add rice cereals to the bottle to make the baby sleep through the night. This is not recommended because it can easily....