Why Has Bigger Nose During Pregnancy?

Pregnancy is one of the most important and eventful periods in your life. Some of us are prepared for everything pregnancy brings to the table, either from past experience or from having watched someone close going through it, but some of us are totally taken unaware of it. But all of us know that pregnancy brings a number of changes to our body. Some pregnant women feel the change of taste in their mouth; some cannot tolerate certain smells, while some others might feel a wider nose and bigger nose during pregnancy! Strange, isn’t it! Read on for more details about it.

What Are Unusual Pregnancy Symptoms?

We know that our bellies are going to get bigger, our breasts are getting ready to lactate, our feet will get swollen with all that weight, and most importantly, our body will go through a lot of hormonal changes. Are you experiencing stranger and weirder symptoms and wondering if they are also aftermaths of pregnancy? You might be right. Although not common, many women report that they had very strange changes in their bodies – such as larger feet, wider eyelids, hair growth on belly – during pregnancy. One such strange symptom is a wider nose or bigger nose during pregnancy

Why Does The Nose Appear Bigger During Pregnancy?

Interestingly, it is not just the nose that is growing bigger nose during pregnancy, and it is your whole body and face. That is right, your cheeks and even your eyelids are growing bigger. So is your feet and belly and arms. However, since the nose is a prominent feature on your face, its growth is more noticeable, that is all.
The overall increase in the size of different body parts can be attributed to the changes in the hormones that happen during pregnancy. Your progesterone and estrogen levels increase during pregnancy, and this increase influences a lot of change in your body, some good (pregnancy face glow and lustrous hair!) and some not so good. In the case of your nose specifically, bigger nose during pregnancy is what happens:

Will The Nose Get Back To Its Normal Size After Pregnancy?

Thankfully, like most of the changes inflicted by pregnancy, the changes in the size and shape of your bigger nose during pregnancy is also temporary. As we mentioned before, the changes in your body and facial features are brought on by the changes in the hormonal makeup of your body. Once you deliver, these hormonal makeup go back to the level it was before pregnancy. And with this, almost all of the changes also get back to normal. Most women, who have noticed their nose becoming bigger or wider nose during pregnancy, report that their nose went back to the normal size in about a month to 40 days after delivery. So, fortunately, the change is temporary. And in any case, the size of your nose is not something the onlookers will notice very fast. You look at your face every day, and that is the only reason you notice these changes.

When you are pregnant, everyone around you is ready to share weird stories and give their expert opinions even if you are not interested in hearing them! Even the gender of your little baby is discussed openly. From a very long time, people have been trying to guess babies’ gender even before the baby is ready to be born. There are so many old wives’ tales going around that claim to predict your baby’s gender. One such tale is about the nose getting bigger. So if you are suddenly becoming more conscious of your nose and feel that it is looking a little bit bigger nose during pregnancy than before, then we have something interesting to share. As per the old wives club, this is happening to you because you will be having a boy!
But then this is just a myth. What holds absolutely true is that every pregnant woman has a 50% chance of having a boy, and a 50% chance of having a girl, with all her pregnancies irrespective of the strange pregnancy symptoms.

When to Consult a Doctor

Usually, bigger nose during pregnancy is quite normal, and you need not worry about it. But, if you notice any swelling anywhere else in your bodies such as face, hands, or feet, you should consult with a doctor. If you notice any severe or sudden swelling, it can be caused because of high blood pressure. And preeclampsia coupled with water retention is not favourable for pregnancy, so it is best that you to meet a doctor without delay.

So, the good news is that you do not have to worry about the growing size of the nose or any of the tales associated with it. You are not transforming to Pinocchio, do not be anxious and relax. Since you cannot do anything about the changes that happen to your body during pregnancy, the only thing you can do is not to be anxious about it and to enjoy it even. After the baby is born, you will have no time to worry about the size of your nose, and by the time, you will have time and patience to notice the changes to your face, everything would have become back to normal.
Have a happy and safe pregnancy! All the best!
Did you or anyone you know experience wider or bigger nose during pregnancy? Share it in the comments section below. 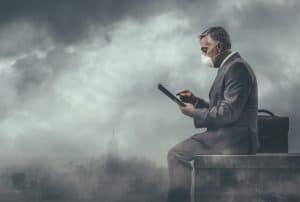 Indoor Air Pollution: How to Protect Your Children?

As the air particles get contaminated significantly due to the toxic gases and elements, the air inside our homes has also become equally polluted as the air outside our home. House is considered the safest place for your child. If that too becomes dirty and your children are not regarded as safe to live there, then that home is not the right place for your kid. Scientists have developed several ways to purify the air inside our homes. However, there some factors to be taken care of that will aid in safeguarding all the people living inside your home. Let us take a deeper insight into this issue and how it can be taken care of with our efforts. What is Air Pollution? Air Pollution is a term used to describe the dust particles, smoke, and harmful gases and fumes contaminate our atmosphere. Air pollution makes life difficult as it brings about breathing complications. This contamination also results in distorting the natural balance as the addition of filthy odors, particles, and gases occurs in the atmosphere. What Causes Air Pollution? Air Pollution is caused as a result of both humans as well as natural actions. The natural events such as forest fires, natural radioactivity,....

Ovulation: Top 5 Signs That Tell You When You Are Ovulating

Every month, healthy couples till the age of early 30's, have a 20% chance at making a baby during their monthly cycles. Ovulation is that time of the month when the chances of conceiving a baby are the highest, and is the most viable time to make a baby. Every month an egg is released by the ovaries which is fertilized by the sperm, and this period is called ovulation. It is very important for couples, who want to get pregnant, to know and copulate during the ovulation period. Hence, knowing the ovulation signs and symptoms, and thus identifying the small window of opportunity is open. Here, we bring you 5 signs that will help you to detect your ovulation period. Top 5 Signs That Tell You When You Are Ovulating Study your cycle: Before the advent of ovulation predictor kits, women around the world traced their ovulation period by tracking their menstrual cycle. It is the simplest way to detect your ovulation period. First and foremost, you need to figure out your menstrual cycle. To understand your menstrual cycle, start counting days from the first day of your period till the first day of your next period. The number you derive is referred to as your menstrual cycle. The....

9 Most Common Causes Of Miscarriage

Miscarriages are disheartening and traumatic events in the lives of partners. Anyone who has been through one or knows of anyone else having gone through such experiences know the hurt, pain and disappointment that a miscarriage could cause. While some women place the blame on themselves for losing the unborn child, it is important to understand that miscarriages are quite out of your control. Quick facts about miscarriages: The loss of pregnancy during the first trimester or the first 13 weeks is termed as early pregnancy loss or miscarriage. It is also termed as spontaneous abortion. A study by the American College of Obstetricians and Gynecologists revealed that miscarriages typically occur in about 10-25% of all known pregnancies (those that are confirmed with a test). But why and how do miscarriages occur? Are the triggers the physical, mental or genetic health of an individual? Read to know 9 most common causes of miscarriage: Chromosomal abnormality: The human reproductive system has all the configurations of a normal and healthy pregnancy stored deep within – a cell memory level. When it encounters a genetic or chromosomal abnormality such as Down Syndrome, Turner....